Since 2012 SALT Chamber has been the market leader in designing, building and installing a variety of unique ways to incorporate Himalayan Salt as architectural elements, specifically for commercial salt rooms in resort and destination spas and other facilities.  Now SALT Chamber is expanding its Décor Division and recently installed a new backlighted Himalayan Salt Wall for display at the new Clive Daniel showroom in Boca Raton, Florida.

“We are very excited to be partnering with one of the premier designers in the area to Showcase our Himalayan Salt Décor and how the Clive Daniel designers can use this element in their luxury and private residence projects,” says Leo Tonkin, CEO of SALT Chamber.   “Many people are familiar with the benefits of Himalayan salt lamps”, says Tonkin, “SALT Chamber uses the same pure Himalayan salt and transforms it into a unique décor element that can be easily installed and used as distinct wall treatments and flooring.”

Marla Jaffe, Director of Design & Business Development for Clive Daniel, says “The natural color and hues of the backlighted Himalayan salt creates such a relaxing and soothing environment, our designers are really looking forward to being able to work this new décor element.”  Jaffe stated that, “…In just one week of completing the display, a customer was exploring the Clive Daniel Showroom, gravitated towards the Himalayan salt wall and we are now designing a feature wall in their home.” 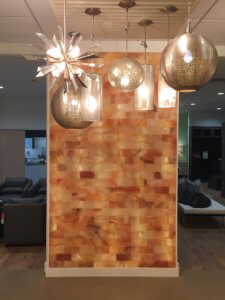 Five years ago, SALT Chamber began innovating the salt room design process and started using Himalayan salt, not only for its unique beneficial qualities but for its amazing natural colors, hues, and creative applications.  Soon salt rooms were being designed and built using natural Himalayan salt materials creating soothing and relaxing environments.  As salt therapy began emerging as a growing trend amongst spas and wellness centers, other applications for using our Himalayan salt décor began to expand to other uses such as wall treatments and flooring in various environments and spaces.  Now SALT Chamber has partnered with Clive Daniel to continue to innovate the design process of using Himalayan Salt as a unique décor and architectural element.

Contact us to discuss how you can start, add or build a salt therapy business.