Do you often hear your horse coughing from their dusty stall? Do not dismiss it as a throat tickle or something that may resolve on its own. It may be heaves, a common, performance-limiting breathing condition that can develop from being in a confined, dusty setting for a long period of time.

Beyond a chronic cough, nasal discharge is another characteristic of heaves, which is also known as Recurrent Airway Obstruction (RAO), COPD, broken wind, and emphysema.

Horses can suffer from impaired respiratory function due to airway congestion and constriction that can ultimately hinder athletic performance. Heaves in horses, which is most like asthma in humans, is not only the result of inhaling dust but mold particles and pollen as well.

The classic signs of heaves in horses include flared nostrils, difficulty breathing, and a heave line, which runs diagonally from the point of the hip forward to the lower edge of the ribs. A heave line develops because when a horse is having a difficult time breathing, its abdominal muscles exert a tremendous outward force during an exhale, causing a line to develop in their skin. Symptom most often occurs around eight or nine years old. 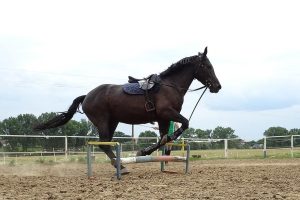 How Salt Therapy Works for Horses

According to the Salt Therapy Association, inside the respiratory system, the dry salt acts as an anti-bacterial agent by clearing secretions and dissolving bacteria and pollutants lodged in the respiratory tract. Ultimately, this lessens inflammation in the lungs, which allows mucus build-up to thin out, thereby improving lung function and opening breathing passages.

Contact us to discuss how you can start, add or build a salt therapy business.